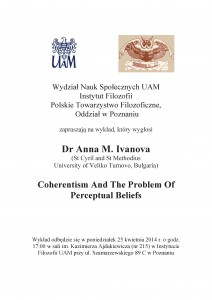 COHERENTISM AND THE PROBLEM OF PERCEPTUAL BELIEFS

ABSTRACT: One of the few shared features of different coherentist theories is the commitment to the idea that all proper justification is inferential. Beliefs in a system justified by coherence do not possess initial credibility or any degree of independent justification; the justification of a single belief is a function of its place within the system.

There are two consequences of this view regarding the status of individual beliefs in processes of belief revision. The first is that any change within the knowledge system affects the justification of all its members and since some beliefs are fallible from the structure of justification it follows that all beliefs are fallible. The second is that under the principle of mutual support alone, it is impossible to ascribe different justification merit to different members of a belief system. Different rearrangements in the belief system must be equally eligible if they result in equally coherent sets.

A tendency that comes from belief revision processes challenges these results: in a system of knowledge, perceptual beliefs seem to bear more importance than other members of the coherent set do. They are more stable in the face of new input that requires rearrangements in the set to ensure conformity:

The stability suggests that perceptual beliefs are better justified than their co-members in a knowledge system, which appears to be inconsistent with the idea of coherentist justification.

I analyze these solutions with respect to belief revision and other doxastic aspects and find them consistent but incomplete in different ways. Bonjour’s solution is successful in generally explaining the truth conduciveness of coherence but it would explain the primary role of perceptual beliefs, only if the recognition of a belief being true is somehow independent of justification. Lehrer’s approach does not allow belief revision that decreases the coherence of a given set of beliefs which is inconsistent with actual belief revision. I find Lycan’s explanation most convincing; however, it presents the truth conduciveness of coherence as a contingent fact based upon established cognitive practices.